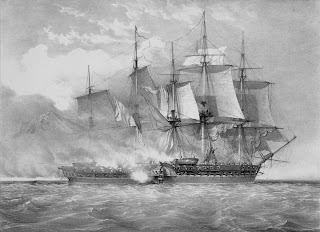 During the Bicentennial celebrations of the War of 1812, historians will be telling a 19th Century story using 21st Century technology.

Take, for instance, the image on the left. It is a digital reproduction of a lithograph of a War of 1812 sea battle. Entitled USF CHESAPEAKE VS HMS SHANNON

, the picture was captured by artist J.C. Schetky and then engraved by L. Haghe around 1813. The engraving could have been used by newspapers covering the war efforts of the new country. (The US was less than 40 years old when this war broke out.)

In what would have taken 100s of hours — for the artist to painstakingly create the image, for the engraver to make the etchings, for the plates to be delivered to the presses, for the presses to run the image and then be delivered to the viewer by horse or foot — in the 19th century, today I can download the image from the Navy’s art collection, add it to my blog and send a message via email, phone or Facebook to you in a matter of minutes. Ah, yes, 21st century technology!

I am looking forward to pointing my phone at a tall masted sailing ship — similar to the CHESAPEAKE — whilst I visit New Orleans for the NOLA Navy Week in celebration of the War of 1812. Then I can snap a photo, download it to my blog and send it to you immediately. So subscribe to my blog now — in the upper right hand corner. And you’ll be updated as soon as I post those photos and more coverage on the events.

Vagabonding Lulu is an Arizona travel writer who loves historic travel. Follow her adventures as she searches for War of 1812 history in New Orleans, Louisiana.