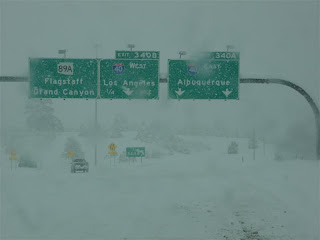 The intersection of I-40 and I-17 on Thursday. Both interstates closed at 6 pm.

In what the National Weather Service has called a “Top 5 Weather Event” for Flagstaff, AZ, snow continues to accumulate. Originally in effect until midnight tonight, severe winter storm warnings have been extended until noon MST Saturday.

A series of Pacific storms continue to pummel the state in the top weather event for Flagstaff AZ. Monday’s storm dumped more than 12″ of snow in the high country and locals in the low lands were warned of hazardous flash floods. Within the next twenty-four hours, the second storm dropped another 24″ on top of the initial accumulation, and areas schools closed.

After the third storm, Governor Jan Brewer declared a state of emergency for the entire state Thursday. The declaration releases $200,000 from the Arizona governor’s emergency funds to pay for emergency response and recovery expenses from heavy rain in lower elevations and deep snowfall in the mountains. An eight-year-old boy was swept away by floods near Mayer, AZ, and is presumed dead.

Today, Arizona Snowbowl, the ski area perched high above Flagstaff, is closed due to extreme weather conditions including high winds and 57″-82″ of new snow. The Coconino County Sheriff’s Department is warning of avalanche dangers on the San Francisco Peaks. APS crews are coming in from around the state to help reinstate electrical service to residents and businesses such as Arizona Snowbowl that has been without power for quite some time. 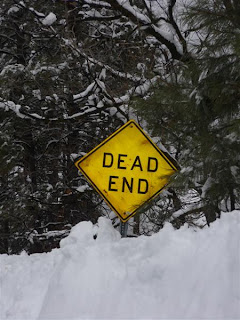 Some northern Arizonans report shoveling 70″ – 80″ of snow since the beginning of the week. “I can barely keep up with it,” said local contractor Bobby Philpott. “I can’t throw the snow much higher,” added his friend from behind a seven-foot-high pile of the white stuff. 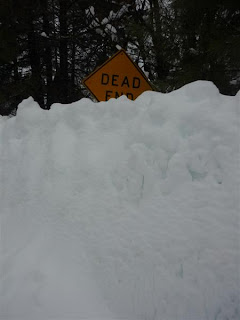 Thursday morning snow brought this berm up, but afternoon rains eroded it to this level.
After the roof caved in at Bookman’s used book store, officials condemned flat-roofed Flagstaff supermarkets. The risks of heavy snow collapsing roofs on shoppers stockpiling for the extreme weather are too high. Currently, Fry’s is the only grocery store open during the weather event for Flagstaff AZ, as the community keeps trying to shovel out. 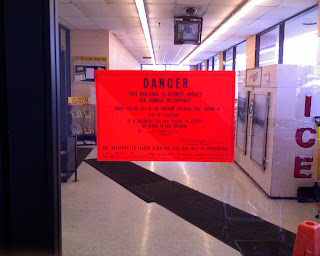 The National Weather Service reports (screaming at us in caps), “STORM SYSTEM TOTALS SINCE MONDAY EVENING ON THE WESTERN MOGOLLON RIM CURRENTLY RANGE FROM 40 TO 60 INCHES.” The people of northern Arizona hope their snow shovels hold out until tomorrow at noon. Unless of course the severe winter storm warnings are extended. “I was at Hunt’s Hardware to buy a snow shovel,” said one shoveler. “Clerks were taking them out of the crate and handing them to the customers who were standing in line waiting for them to get unpacked.”

Enjoy this article? Then click the “subscribe” button above this article. “UNSTOPPABLE Stacey” Wittig  is an Arizona travel writer and Flagstaff hiker who enjoys sharing free travel tips and travel news about the Southwest USA . For Arizona hiking info click here.

Today I can’t stop exploring the world (I blame it on my father’s Viking blood) and write about my adventures – many as a solo woman traveler. Life isn’t always rosy; I lost my firecracker reasoning skill to head injury in a horrific rollover accident that should have taken my life. Brain injury hasn’t stopped me from traveling, although it sometimes makes for amusing travel antidotes that I hope you will enjoy. That’s why they call me “UNSTOPPABLE!”