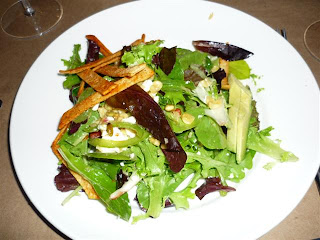 The Flagstaff, AZ, restaurant scene continues to ripened with new restaurants. If you’ve not been to the historic mountain town for awhile, you’ll be surprised to reap a whole new variety of taste treats. The following three eateries sprouted from tried-and-true favorites, so that means you won’t have to “experiment” with your restaurant dollars. Get more Flagstaff foodies’ picks for where to eat in Flagstaff.

So what Flagstaff restaurants are ‘Tried and true?’ Brix earned “Top 95 New Restaurants in the World” by Conde Nast Traveler in 2007 and now owners Paul and Laura Moir bring that success to their new inception Criollo Latin Kitchen. The couple’s collaborative efforts build upon the philosophy of local and sustainable foods. Their latest endeavor, Criollo (pronounced kree-OH-yo,) is named after a Spanish breed of beef cattle brought to Arizona in the 1400s that is well-suited to the local climate.
Criollo’s brunch menu features local foods such as the ancho-coffee rubbed skirt steak from organically-grown beef and chimmichurri in the “Steak and Eggs.” For lunch you can choose from such delectables as Ostiones Fritos (Masa Fried Oysters,) Cebiche del Día (citrus-cured seasonal fish with jalapeño, tomatoes and cilantro) and, of course, a Criollo Burger served with pickled red onion, watercress and chipotle aioli.
I don’t know if paella has ever been seen on a Flagstaff menu before, but this Latin-inspired restaurant is offering one of my favorite dishes, Paella Criollo, made of seasonal fish and shell fish, chorizo, tomatoes, fennel and saffron-infused Arborio rice. Or try the Pollo Mole Burrito, Bistec de Mojo Ajo or Tamarind Marinated Pork Tenderloin plated with grilled cactus and yucca fritters. There are plenty of vegetarian items on the menu.
I’m impressed with their selection of Spanish wines that I sip while enjoying the tapas (small-plated, traditional Spanish appetizers) and dream about traveling across the Iberian Peninsula. Don’t let the hostess sit your group in the three-walled alcove. The acoustics are terrible when nearby tables get loud.

The Lumberyard Brewery is the love child of family-style Beaver Street Brewery and the over-18-crowd Brews and Cues Billiards. The new restaurant offers a comfortable, sports-bar atmosphere with flat-screen TVs on every wall and lots of outdoor dining. Part of the building was constructed in 1890 during Flagstaff’s timber heyday. Much of the old lumber was repurposed for the new restaurant’s embellishments.
Nosh with nachos, wings, sliders or our fave, Yin Yang Hummus “East (black bean hummus) Meets West (Edamame hummus)” served with crunchy wontons and corn chips. Salads are huge and come in the chef’s metal mixing bowls. Skip the BBQ vinaigrette; what was I thinking? The deli sandwiches are healthy (in size) as well.
After taking your first bite, you might just feel the earth move under your feet. But no worries, it’s just the passing train. The historic building sits at the side of Flagstaff’s famous railroad tracks. Fortunately, the excruciating train whistles were banned and silenced forever before the restaurant opened this spring. We expect the Lumberyard Apricot Ale to be as acclaimed as other brews in the Beaver Street stable of winning beers and ales.

For the past 16 years I’ve said, “Flagstaff would be the perfect town if it had a decent baguette.” Well, I am here to tell you, folks, perfection has arrived. Wildflower Bread Company offers more than the coveted baguette: their breakfast, lunch and dinner are each an understated, mouth-blessing experience.
“We’re offering white tablecloth quality food with fast, casual service and at family prices,” said Louis Basile, the company’s founder last week. “You get your food fast, but you can stay in the restaurant as long as you wish.”

Basile was in town for an informal gathering of tasters; I was fortunate to be invited. “We constantly ask, ‘Is this the best I have ever tasted?’” said the restaurateur about choosing quality ingredients and menu items.
I didn’t realize that Wildflower is an Arizona company.  I first experienced the bistro in Prescott, and thought it was a national chain. After tasting their fresh, flavorsome wares in Sedona and Prescott, I lined up with other Flagstaff foodies for their grand opening in February.
My favorite breakfast is the Roasted Tomato, Feta and Egg Sandwich that is layered with fresh basil. All the salads are superb, but it’s hard for me NOT to order the Emerald Spinach which is a scrumptious combo of Gorgonzola, bacon, red onion, spicy pecans, oranges, strawberries and red grapes.
I suggest you try Wildflower Bread Company and ask yourself, ‘Is this the best I have ever tasted?’ I believe your answer will be ‘Yes!’ Don’t forget to buy a baguette to take home. 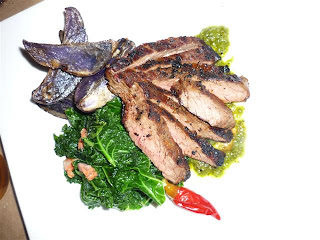 Criollo Latin Kitchen
16 North San Francisco Street
Flagstaff, AZ 86001
928-774-0541
Lumberyard Brewery
5 South San Francisco Street, Flagstaff
928-779-2739
Wildflower Bread Company
530 East Piccadilly Drive, Flagstaff
Southeast Corner of Butler and Lone Tree
928-233-5010
Please check the Flagstaff restaurants current menus as their offerings were sure to have changed since 2010 when I first wrote this article. But be assured, these Flagstaff restaurants are still some of my favorites!
Check out hotel prices and more information about staying in the charming mountaintown of Flagstaff, Arizona.
UNSTOPPABLE Stacey is an Arizona travel and food writer who writes about Flagstaff, Spain, France and other places around the world.

Four peas in a pod! Having fun visiting with dad a…

Was sad to leave this tasty treat behind when I le…

Why should you shop luggage now? Plus Flagstaff fo…