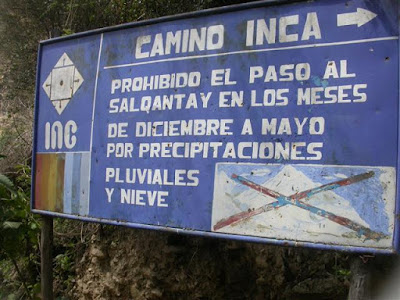 I ate the bizarre foods of Peru

If you are an adventure traveler, you know Cuzco, Peru, as the staging area for trekking the Inca Trail. As the oldest inhabited city of the New World, Cuzco charms with Spanish Colonial churches, Inca ruins and sweet artisans selling crafts from colorful arcades. But it’s Cuzco’s culinary adventures that fascinate me and have me talking ever since.

Things to eat in Peru

In a small shuttle bus driving out of town towards the Inca trailhead, I got my first culinary lesson about the things to eat in Peru. Our guide, David Espejo Chavez shopped the Cuzco market that morning to procure a local delicacy, brought it home to prepare and was passing it out as our van careened over the Andes highlands.

“These are very unusual. Maybe once or twice a year you can find them in the market,” the Peruvian said over the rattling windows and straining engine. He staggered up the rocking aisle of the Toyota shuttle bus distributing the rarity. Most of my fellow adventurers peered into the bag and passed on the offer. “They’re sautéed in olive oil before being mixed with roasted corn. The corn gives them some crunch.” But even with corn camouflaging the texture, not many of these norte-americanos were sampling the small, dark lumps. 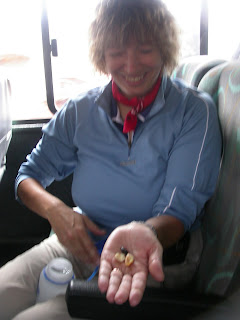 “We’ll try them,” my girlfriend Moni and I called out. The half-inch, almost teardrop shaped lumps were the color of dates. When you looked closer at them, you noticed translucency – you could almost see something INSIDE the lump.
“What are these?” I asked trying to make out what I saw under the translucent brown layers.
“You are eating chrysalis – fried butterfly larvae,” revealed David. The corn did help to give crunch to the gooey lepidopterans. It was like eating caterpillars, a very bizarre food to me, but a delicacy to Peruvians.

As the countryside whizzed by, David pointed to a farm situated on open grasslands. “Those are guinea pig farms,” he explained.
“Could they really have such large demand for pets in this poor country?” I pondered.
“Free-range guinea pigs are much tastier,” continued our guide. “You’ll sample roasted guinea pig after our four-day trek.” Hum, I wasn’t sure that I wanted to taste the wierd food. 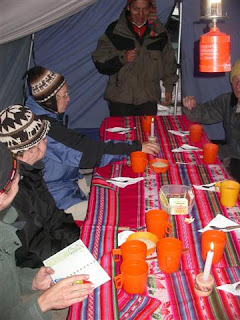 High-energy foods originated from the Incas

During the four-day hiking adventure I ate quinoa and small, snow-white potatoes. Both high-energy foods originated in Peru from the Incas that centuries ago built the stone roadway on which we walked. The local food gave us the much-needed energy to hike to 13,000 feet or 3960 metres above sea level. Once we completed the 24.6-mile or 39.6-km trek, we gifted ourselves with an extra day to explore the ancient ruins of Machu Picchu.

Tradition of the bizarre foods eaten in Peru

“I ordered ahead for our guinea pig dinner tonight,” David announced during our train ride back to Cusco. “I’ll take you to the cathedral where you can see our version of the Last Supper. Jesus is serving roast guinea pig to his disciples.” Sure enough at the Cuzco Cathedral built by the Spanish in the 1500s, we viewed the infamous painting. View more curious Last Supper artwork.
The Last Supper painted by Marcos Zapata, Cathedral of Cuzco – Toño Zapata [Public domain]

Right across La Plaza de Armas from the cathedral is La Retama Restaurant where we were to eat the guinea pig. As far as I was concerned, the coming meal gave a new meaning to the words “pet food.”

Once there, savvy restaurant owners served complimentary Pisco – the iconic Peruvian brandy distilled from grapes of Spanish origin – to give us liquid courage for the main course.
Roasted guinea pig is one of the local things you must eat in Peru
Finally, the rascal was presented on a platter — head, feet, claws and teeth intact — surrounded by potatoes and veggies. This weird presentation caused a photo frenzy. Once camera flashes subsided, rodents went back to the kitchen to be carved. Then back they came, one dissected guinea pig per couple.
“And what does guinea pig taste like?” friends ask. You know the answer, you world traveler. Guinea pig tastes like chicken, of course.
This article was first published by Travel + Escape, the Canadian Travel Channel website. UNSTOPPABLE Stacey is a travel blogger based in Flagstaff, AZ. Subscribe to her blog now.

UNSTOPPABLE Stacey was NOT provided with accommodations, meals or other compensation for the purpose of review. While it has not influenced this review, the Arizona travel writer believes in full disclosure of all potential conflicts of interest.

In addition, this blog, UNSTOPPABLE Stacey Travel, contains affiliate links. If you make a purchase through these links, Stacey earns a commission at no extra cost to you. These commissions help reduce the costs of keeping this travel blog active.

Further, as an Amazon Associate I earn from qualifying purchases. Thanks for reading.

Enjoy this article? I’d love to hear your thoughts in the comments section below. Please share this article with the red- and blue-colored social media buttons.

To get more FREE travel tips and inspiration, simply subscribe below and updates will be delivered directly to your email inbox.