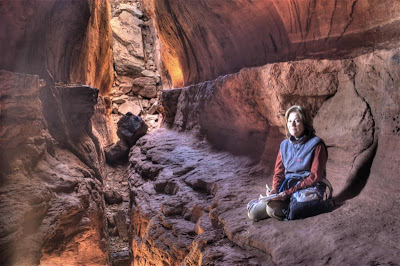 Natural light from above and below make this stone ledge a mystical retreat.
Sedona, AZ — Hike back into one of Sedona’s lonely red rock canyons and you feel that you are in a strange world. Most hikers’ spirits are quieted as they escape further back into narrow canyons made of stratified formations. Others get downright giddy. Giggly newcomers to the wondrous red rock country are a common occurrence along Sedona’s many trails.

Yesterday photographer Charles Bame and I found a respite from others in a secret place off a Sedona side canyon. We crawled through a hole in the rock hidden by Arizona Sycamores and scruffy pine trees and spent several hours photographing and writing. Do you recognize our mystical retreat? Probably not since it is hidden under tons of rock and is one of Sedona’s seven secrets. If you think that you recognize this womb-like spot, let us know by leaving a comment.

Chuck and UNSTOPPABLE Stacey are collaborating on a book project that will reveal the seven secrets of this other-worldly red rock country. Subscribe on the right hand side of this website, and we’ll let you know when the book will be available for on-line purchase.
____________
Stacey Wittig is an Arizona travel writer – yeah, she writes about Arizona travel AND is an Arizonan who writes about travel throughout the world. Subscribe to this blog and get FREE travel advice… and learn all of Sedona’s Seven Secrets.
Today I can’t stop exploring the world (I blame it on my father’s Viking blood) and write about my adventures – many as a solo woman traveler. Life isn’t always rosy; I lost my firecracker reasoning skill to head injury in a horrific rollover accident that should have taken my life. Brain injury hasn’t stopped me from traveling, although it sometimes makes for amusing travel antidotes that I hope you will enjoy. That’s why they call me “UNSTOPPABLE!”

A dock is sort of a threshold. The spot where you…

With all the discouraging news about air travel la…

"That which you see is the invisible," so says the…

Paco from Valencia, the true home of paella, taugh…

On the rooftop of Our Lady of Assumption Church in…

These pintxos reminded me of a Miro painting. But…
Menu